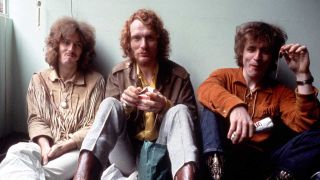 A previously unreleased track from Cream has been released. The live version of Sunshine Of Your Love was recorded at California’s Oakland Coliseum Arena on October 4 1968, just weeks ahead of the band's final show at London's Royal Albert Hall.

Sunshine Of Your Love comes from the band's upcoming box set, Goodbye Tour Live 1968. The 4CD set is set for release on February 7 next year, and features a total of 36 tracks recorded during their final tour, including 19 unreleased tracks, and a further 10 from the Royal Albert Hall show which have only ever been available on the Farewell Concert DVD.

The original release of Goodbye – in February 1969 – featured three tracks recorded live at the Forum in Los Angeles, while the new, expanded edition also features recordings from the San Diego Sports Arena as well as those made in Oakland. The complete track listing is below.

The package is completed by a book featuring liner notes by Rolling Stone's David Fricke, and is available to pre-order now.