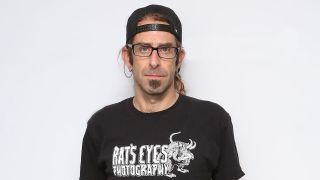 Lamb Of God frontman Randy Blythe says he was the victim of a gang attack in Dublin, Ireland, earlier this week.

He lost his glasses and sustained minor injuries when five or six teenagers assaulted him late at night on November 8 (Sunday) – hours before his band launched their tour with Megadeth.

And last night (November 9) he dedicated prison-themed track 512 to his attackers from the stage at the city’s 3 Arena, saying: “I hope you get your fucking heads kicked in.”

Blythe says via Instagram: “I looked up and saw five or six teenage dudes, 16-18, in hoodies and track pants, spreading out around me. ‘Well, crap, I guess it’s on,’ I thought.

“I started stepping quickly into the street, away from the cul-de-sac where I was – a bad spot to be trapped – trying to keep my eye on them at the same time.

“One kid drew up to my left, getting close, and blam – someone else hit me in the head from behind with something, a stick or whatever. I saw stars for a second.”

He was rescued by a taxi driver, who saw the assault taking place and drove his cab at the gang. “That little fucker had rung my bell pretty good,” Blythe says. “Like all cowards and weaklings they came at me in numbers and struck from behind. I never had a chance to smash one of the little shits because the cabbie scattered them while I was regaining my wits.”

Blythe lost his glasses during the attack, although he also uses contact lenses. He sustained a cut elbow and headache, and also lost a hat, which he’s replaced, and an e-cig.

The vocalist continues: “It could have been much, much worse – I could have caught a knife. I’ve been in some of the sketchiest neighbourhoods on Earth and escaped unharmed, but I got distracted and forgot my street smarts for a couple of minutes. That was very, very stupid of me, and I paid the price.”

The frontman insists he still loves Dublin and the incident won’t affect his decision to return in the future. But he says: “Please neuter and spay your feral children. Next time they might club someone whose head isn’t as hard as mine.

“Sorry if the show was a little rough. I did my best for y’all.”

Lamb Of God’s UK tour continues this week, with drummer Chris Adler pulling double duties with Megadeth. They feature in issue 277 of Metal Hammer magazine, available now in print, digital and via TeamRock+.