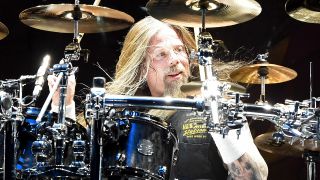 Former Lamb Of God drummer Chris Adler has spoken about his departure from the band – and praised his replacement Art Cruz.

Adler and Lamb Of God officially parted ways in the summer of 2019, after the drummer had been out of their touring lineup since 2017.

And in a recent interview with Andrew Haug Radio, Adler spoke about his departure – and says he’s looking forward to hearing Lamb Of God’s new self-titled album which launched on Friday.

Adler says: “I think everybody parted on good terms. I'm really excited to hear their new record, so I'm thrilled to hear what's going on with them. I'm sure they're doing very well.

"I left my drum throne in good hands with Art, who has been a friend. I think I met Art when he was 17 years old. I've got a picture of me and him standing outside the tour bus when he stood there waiting for an autograph. He and I have been friends for a long time. And, obviously, the guys in the band are not only family but became great friends over 25 years.

“It was quite a career we had. I don't think anybody from either side would say it ended really particularly well in that I think we all hoped and dreamed and wanted the same thing, but just couldn't seem to get ourselves on the same page for whatever reason.

“It’s been a great time to settle back into normal life and explore some other things. I've done some clinic tours, and I've connected with other artists and been really connecting at home with my family."

Adler adds: “As much as I loved doing what I was doing, it certainly seems like it was a good time to step away. I think everybody wins in that regard. And I wish the best for them. I hope they do for me.

“The shoe didn't fit anymore on either side. I’ve been exploring a lot of other things in that same world and a couple of interesting things have come out of it."

Lamb Of God marked their new album release with a video for the track Gears on Friday last week.