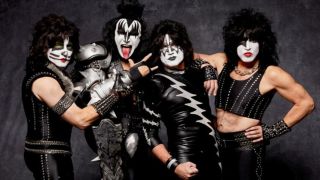 Helsinki has paid tribute to Kiss by placing the band’s famous Starchild, Demon, Spaceman and Catman masks on the towering granite statues which stand at the city’s main railway station.

They’ve been placed on the ‘four men of rock’ to mark the band’s show at the Finnish capital’s Hartwall Arena tonight (May 4) and will be removed on Friday.

Vocalist and guitarist Paul Stanley was so impressed with the honour, he posed for a picture and posted it on Twitter with the caption: “At the Helsinki train station. Size counts! Such an honour.”

Following the concert, Kiss will play further dates across Europe, including a show at London’s O2 Arena on May 31.

The band have teamed up with the Teenage Cancer Trust for the night and have opened an online auction, with the winning bidder getting the chance to meet Kiss and watch an exclusive 30-minute acoustic set before the show.

In addition, the successful bidder will get a photograph with Kiss, be given a private tour of the venue by the band’s manger Doc McGhee, and take home a Paul Stanley Custom Ibanez guitar signed by the group.

All proceeds from the online auction will go to The Teenage Cancer Trust which provides vital cancer services for young people across the UK.

The auction has six days to run.