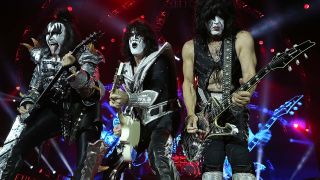 Kiss are planning to release a biopic before they retire in 2021.

Manager Doc McGhee says that the rock legends will follow in the footsteps of Queen, Mötley Crüe and Elton John and release their own movie.

Speaking on Rock Talk With Mitch Lafon, McGhee said: "Hopefully in the next week we'll have a company behind it, and we'll start finishing the script, and hopefully by the time we end we'll have a movie finished for July of next year."

McGhee revealed that producer Mark Canton, who worked on the movie 300, is involved in the project. If it goes to schedule, the untitled movie should land in July 2021 – the same month Kiss are set to play their final show in their hometown of New York City.