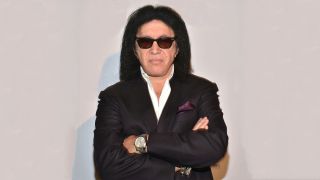 Gene Simmons has slammed bands who use backing tapes – just weeks after Kiss admitted using them.

In February they confirmed they’d used some non-live elements during a tour of Japan, saying: “To reproduce production here, we play live with extra tracks. Nothing to hide.”

Now Simmons tells AdelaideNow: “There’s nobody with a synthesizer on our stage. There’s no samples on the drums, there’s nothing. AC/DC, Metallica, us – there’s very few bands who don’t use tracks.”

But he says his argument is more about honesty than about the use of additional elements, adding: “I have a problem when you charge $100 to see a live show and the artist uses backing tracks. It’s like the ingredients in food – the first ingredient on the label is sugar. That’s at least honest.

“It should be on every ticket: ’30 to 50 per cent of the show is backing tracks. They’ll sing sometimes, sometimes they’ll lip-synch.’ At least be honest.”

Referring to Madonna’s onstage fall during last months’ Brit Awards ceremony, Simmons says: “That was unfortunate, but she got up, on with the show. It’ll happen. That’s not embarrassing – it’s embarrassing when the backing track dies.”

Kiss headline this year’s Download festival at Donington on June 12-14.