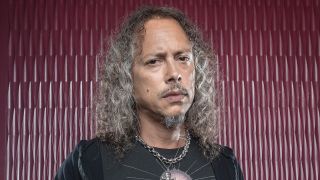 Metallica guitarist Kirk Hammett has opened up to St Vincent – aka master guitarist Annie Clark – on his role in the legendary thrash group.

Speaking to Clark as part of Rolling Stone's Musicians On Musician's series, Hammett is quizzed by Clark about his influences and process. "I always feel like I have so much more to say on the album, but I can’t say it," he says.

"It’s crazy, because I’m so curious about music in general. I can play a lot of different stuff. I’ll play some jazz, bossa nova, blues, gypsy jazz, fucking Eastern European ballads. I play all that stuff. But no one knows I can play this stuff. It’s so crazy.

"I’m always trying to sneak in jazz voicings and chords, little techniques here and there in Metallica."

To which, Clark asks if the guitarist's ideas are ever "shot down".

"All the time," Hammett replies. "'That sounds too bluesy.' And I’m like, 'Fucking hell, it’s just a slide. All right, whatever, tone police.' But you need tone police. Tone is super-important."

Hammett also admits he likes to spice things up in the group when playing live. "I try to bring an element of improvisation to the band so we don’t sound the same every single fucking night," he tells Clark. "I don’t like rigidity. I came from a generation of musicians whose mantra was never to play the song the same way.

"I only play certain guitar solos like the album, because I know that’s what the audience wants. But then there are solos where I don’t know what the fuck I’m going to play. I love putting myself into a scary situation."

Earlier this year, Metallica were forced to cancel a number of tour dates as James Hetfield entered rehab. The band then announced they'll be back on the road in summer 2020, headlining five festivals, playing a double set at each.