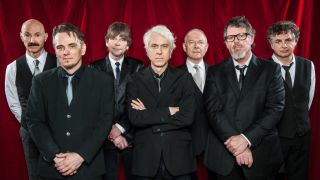 The first new music from the reformed King Crimson line-up has appeared online.

On the site, DGM say: “Well, here we are. A bit of King Crimson 2014. One should always be wary of coming to judgement about anything based upon a clip that lasts less than a minute and a half but, but, but… Taken from the rehearsals in Elstree Studios, this snippet has four of the seven-piece Crimso clearly enjoying themselves. There’s a wealth of back and forth interplay detail between Reiflin and Harrison and of course Levin and Fripp not only grab the lapels but go straight for the jugular. Oh, never mind about the rush to judgement: this is King Crimson and they’re on fiery form!”

King Crimson kick off their 2014 Us tour on September 9 with dates running through to October 6. No European or UK dates have been announced thus far.