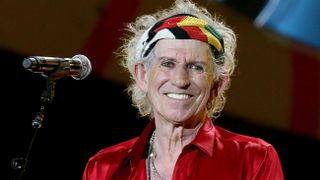 Keith Richards will take over the BBC4 TV channel this weekend.

It was previously announced that the Rolling Stones guitarist would be given free-reign to curate programming about whatever he finds interesting. And now it has been confirmed that Keith Richards’ Lost Weekend is airing on BBC4 from 7pm on 23, 24 and 25 September.

Richards, 72, is working with music documentary film-maker Julien Temple on the project which has seen him put together a line-up of films, cartoons, music clips and other footage.

Temple tells the Guardian: “I don’t think many people could pull it off. He’s one of the greatest raconteurs, so spending time with him is real quality time – and his life philosophy and survival strategies and contagious sense of humour will come together to create a good mix over those 27 hours.”

The content will include interviews between Temple and Richards. Temple, who directed rock musical Absolute Beginners starring David Bowie, as well as films on the Sex Pistols, Joe Strummer and the Kinks, adds: “It’s interesting to see how he’s dealing with where he’s at now.

“I think you get incredible insights into how it felt to become famous so suddenly. The whole journey is in there, but the most fascinating thing is how at peace with himself he is these days. He talks about life and death, he talks about badgers, he talks about fame.”

The Rolling Stones will take part in the Desert Trip festival in California in October, alongside Bob Dylan, Paul McCartney, Neil Young, Roger Waters and The Who.