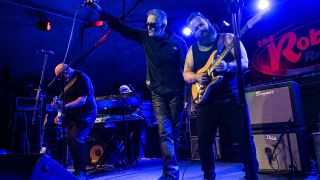 Jump have announced the departure of bassist Mark Pittam, who is leaving the band to spend more time with his young family and pursue other projects. he is replaced in the band by their former bassist Andy Faulkner.

“Mark has been absolutely brilliant for this band," Jump frontman John dexter Jones tells Prog. "He’s been a catalyst for so many good things, not least our approach to Over The Top and the soon to be released A Thousand Voices. He joined Jump when were sorely in need of someone of his talents and has been an absolute diamond throughout.

"If ever there was a Hotel California band, then this is it. Andy Faulkner checked out some time ago... but guess what? We’re looking forward to convening in the new year to get ready for a very special series of gigs. The 30th anniversary gigs in Aylesbury will be mad - I think the Saturday sold out in a week or two. We’ve got the original 1990 lineup doing a set, the lot... can’t wait!”

Pittam will take charge of post-production for Jump's forthcoming new album A Thousand Voices, which is due for release net Spring. He will also appear at the band's 30th Anniversary shows at Aylesbury's Limelight Theatre on April 17 and 18.