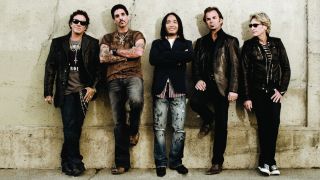 Neal Schon wants to make another Journey album – but first the guitarist has to persuade his colleagues to get on board with the idea.

Frontman Arnel Pineda has previously stated he’d like to do more. However, keyboardist Jonathan Cain last year said he thought their studio career was over following 2011’s Eclipse, saying: “We’re not convinced the market will bear another CD from us.”

But Schon wants to keep writing new material. He says: “Nobody’s really all that jacked up about recording new songs right now. I am – but I’m trying to get everyone else motivated.

Schon has another idea if his bandmates don’t want to write new music: “We’ve been talking of re-doing some songs – not stuff we did with Steve Perry, but other stuff we’ve done in the past that never saw the light.

“We started playing some stuff in rehearsal that sounded great. When you start going that there’s always going to be new songs that come out of nowhere.”