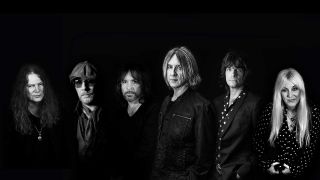 Down 'n' Outz have announced the release of their third album. The project, fronted by Def Leppard's Joe Elliott, will release This Is How We Roll on October 11. The band have also released the title track as a single.

"Boy, has this has been a long time coming!", says Elliott. "Recorded in infrequent bursts of activity over a five-year period whenever our respective motherships allowed, I’m extremely proud of what we’ve achieved with this album.

"I’m blessed to have worked with such a superb bunch of musicians on this collection of songs. To a man, and woman (!), they completely got my vision of what I wanted us to convey on this record and, as usual, working with a world class producer/engineer in Ronan McHugh has guaranteed the sound of the record to be top notch! I couldn’t be more proud."

"This Is How We Roll is absolutely fantastic, probably one of the best records I’ve worked on," says Griffin. "It doesn’t sound like Leppard or the first two Down 'n' Outz records.

"It’s kind of all the stuff Joe grew up with: a lot of piano type stuff, a bit Elton John, one track a bit 10cc, a couple of good rockers… a real mix of stuff. Joe’s voice sounds amazing and it’s great fun to do."

Unlike the first two Down 'n' Outz albums, My ReGeneration (given away in Classic Rock at the time) and The Further Adventures Of..., albums which paid tribute to the music of Mott The Hoople and associated acts, the album only features one cover version - The Tubes' White Punks On Dope - alongside eleven original Joe Elliott songs.

This Is How We Roll track-listing
Another Man’s War
This Is How We Roll
Goodnight Mr. Jones
Creatures
Last Man Standing
Music Box
Boys Don’t Cry
Walking to Babylon
Let It Shine
Music Box Reprise/Griff’s Lament
White Punks on Dope
The Destruction of Hideous Objects Part 3