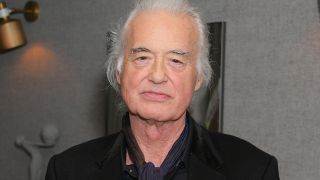 Jimmy Page has reflected on Led Zeppelin’s reunion at London’s O2 in 2007 and admits it’s “unlikely” the band will ever get together again for a tour.

The performance had fans hoping that Zep’s reunion would lead to further shows, but vocalist Robert Plant ruled himself out, telling Rolling Stone in 2014: “A tour would have been an absolute menagerie of vested interests, and the very essence of everything that’s shitty about big-time stadium rock.”

Page was a guest on Zoe Ball’s Breakfast Show on the BBC to chat about his collaboration with the Rolling Stones on the track Scarlet, when he said: “At the time of the O2, myself, John Paul Jones and Jason Bonham though there was going to… it was said that there were going to be some more dates.

"It would’ve been really good to have done that after the O2, because we’d put a lot of work into the O2 and we were really on it. But it didn’t come off.”

He added: “It seems really unlikely that there would be a tour in the future. Unlike The Rolling Stones, they do sort of know that the fans love that  – I know that with Led Zeppelin fans too. But it doesn’t look as though there’s anything in the future, unfortunately.

"We’re talking about a concert that was gigantic at the time, but it's 2007 – time passes."

Led Zeppelin's reunion took place at the Ahmet Ertegun Tribute Concert on December 10, 2007 – a benefit show in memory of the co-founder and president of Atlantic Records.

It was Led Zeppelin’s first show in 27 years and saw approximately 20 million people applying for tickets through a worldwide lottery.