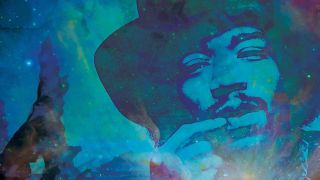 A woman who met Jimi Hendrix one night when she was 19 is to auction the note he wrote to her that night.

Anthea Connell says she was “awestruck” when Hendrix approached her at the Gliderdrome venue in Boston, Lincolnshire, in March 1967.

The meeting took place before the venue opened for the evening, while she was watching her boyfriend’s band set up their gear as they prepared to support the Jimi Hendrix Experience.

Connell, now 69, tells the BBC: “I think it was because, at the time, I was the only girl in the ballroom.”

“He started talking to me and I was so shocked I can’t even remember what we said.

“I’d love to tell you we had a deep and meaningful conversation. I must have mumbles something. I was totally awestruck – Jimi Hendrix was a complete icon.”

The guitarist then asked bandmates Mitch Mitchell and Noel Redding for something to write on, and they produced a paper envelope for a guitar string.

He wrote on the envelope: “To Anthea – love and kisses to you for ever. I wish I could really talk to you. Stay sweet. Jimi Hendrix.”

The note will be sold along with Mitchell and Redding autographs on October 23 via Hansons auctioneers in Derbyshire. It’s expected to go for between £2000 and £3000.

Earlier this year, a velvet smoking jacket once owned by Hendrix sold at auction for £8000.