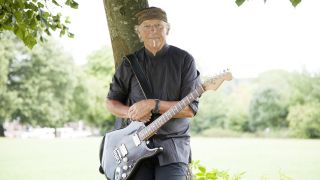 Jethro Tull guitarist Martin Barre has named his sixth solo album Back To Steel – and he’s designed it as a celebration of his five-decade career.

The follow-up to last year’s Order Of Play is released on September 18, and includes his take on Tull tracks Skating Away and Slow Marching Band, plus a cover of the Beatles’ Eleanor Rigby.

Barre says: “This CD is my most important work in my career as a musician. I feel my songwriting has matured to a point that makes it totally accessible to all audiences.”

He adds: “I want this music to be the basis of everything I do from now on – my criteria were that It would work live in a powerful way and keep our identity as a blues-rock band.

“As always, I’ve put in small quotes of music that give light and shade to the album.”

Tull mainman Ian Anderson has said it’s unlikely the band will work together again, and he’s concentrating on a solo band show based on the band’s catalogue. Barre is planning a large-scale tour for 2016 and plays the following dates this year: