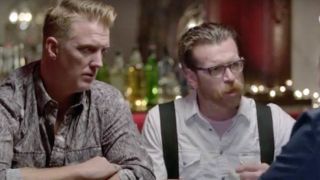 The singer says he believes many of the 89 killed at the Bataclan venue where the band were playing on Friday, November 13, died because they refused to leave their stricken friends.

In total, 130 people were murdered in the French capital by gunmen and suicide bombers. Extremist group IS has claimed responsibility for the attacks.

In a brief trailer for a longer interview due to be released next week, Hughes tells Vice: “Several people hid in our dressing room and the killers were able to get in and killed every one of them, except for a kid that was hiding under my leather jacket.

“People were playing dead and they were so scared. A great reason why so many were killed is because so many people wouldn’t leave their friends. So many people put themselves in front of people.”

Hughes is joined by bandmate Josh Homme in the interview. Homme was not with the band in Paris.

EODM cancelled their remaining tour dates in the wake of the attacks.