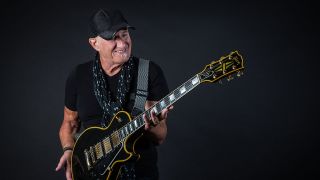 Former Focus guitarist Jan Akkerman releases his brand new solo album, Close Beauty, through Mascot Label Group today. You can listen to the whole thing below. But here he talks us through each track on the new album:

To start off, I put a kind of castanette rhythm in the computer and asked the band to improvise on the chords which are secret otherwise it’s not private anymore. It’s kind of an absurdist/realistic approach just like the album cover done by Michael Cheval.

The story behind the song is derived from various scales which I used and the title is more like a paradox with a little secret a cognitive resonance and in the hope I’m typing this right.

But the solo was played on the Saga model "Jean Akkerman" a 1-2-1 copy of the Django Rheinhardt model from 1932.

This is my style AND blues-feel throughout the song, I rerecorded it with the band in the studio. I missed the timing and feel of the solo etc., because I’d recorded it at home a year previous and recorded it in 1 take as with all the songs on this album and to get the vibe back because that moment will never come back again. So what I did together with Coen Molenaar [the producer] is take the initial recording and fit it in the band/studio version, which was recorded slightly slower but with a little appliance of science we straightened that out.

The title I had for  a long time because I didn’t have a clue how to rename the song, I mean "rebel without a clue" doesn’t fit so the producer & I thought Reunion was the best choice for this song. The song itself was on the shelve for years and for some reason I never got to record it until this CD came about and it fitted perfectly in the context of this album.

The title was inspired from a simple notion, that when you are too close to an object you cannot see the real value i.o.w. if you stand an inch away from a camel you don’t see it’s a camel or a horse.

Well as  a kid I was infected by all kinds of music which extended later to the classical guys, but my first love was all folk type of music and particularly R&B and R&R -Django Rheinhardt, and still do love old Elvis or Fats and later Miles, Wes... Too many to mention but I feel privileged to get to know all the worlds music.

The first piece called Emotional Debris comes from the Bartok-era I used to listen to a lot and has to do with my band live. The second song is The Power Behind The Throne as an answer to House Of The King. The third song is based on a BBC story about the WWI where 2 soldiers marching while smoking a fag on their way to the Somme and one says to the other "Hear the trees whistle for the dog." It touched my soul.

Last song is a composition from Moving Wave's Euridice - end of the story.

I found the title very inspiring because it reminds me of the late renaissance and its dances. It was originally made for a movie about a painter who actually lived in Florence and my bass players mum also componiste who wrote a book called Passagaglia. It’s played on a special 12 string Guitar tuned in 5th made in Italia.

The idea came from a song written by Tom Barlage and I liked it so much that I recorded it again but then with a different angle to it. So 45 years later I thought it was time for an answer to that song and made the Intro on the spot in  the studio while the rest of the band had a coffee. Coen Molenaar (keys), Marijn van den Berg (Drums), David de Marez Oyens (bass). Added a rhythm guitar to it and from there I took it and it came out beautiful.

It’s a bit odd how it came about, a friend used to call me Giovanni Agriuomo, which is my name in Italian. Later on, on a tour through Brazil a member of the band called me a lady killer. I told him that as soon the relationship ended with the lady they always tried to kill me which triggered the idea that the Mozart opera Don Giovanni suited the occasion because I’m Knighted by the Queen in the Netherlands, which in return means "Don" and my name is "Giovanni".

Among one of my favourite hangouts is the South of France and the song is reflecting that. It’s a carefree song about hanging out on the many terraces and coastal places,  sun-sea  Having a glass of red wine and see the sun shining through the glass with a little drop of red wine on the edge of the glass and you have never seen this... You missed it .

It was a mistake or misunderstanding between me and the producer and it looks like he took the title French Pride because he thought the song was quite revolutionary in harmonies and a heavy beat under it or at least about resistance, but  the original title was French Fries. I felt like a dyslectic rabbi singing "Yo"...

The original title was Fromage a Trois and I’d wanted  to dedicate it to the three kings in blues; BB, Freddy and Albert King. But for the same reason as the previous epistle it got lost in administration of things but that doesn’t mean that the playing was wrong. Au contraire! I love this song it has an almost vaudeville air to it, like the good old days.

The song is based on a gospel feel with a different solo effect, some people call it jazz but that’s not it. It’s the rhythm guitar that gives the flavour to the song and forces the lead to take another approach than standard blues licks and it worked. The title is borrowed from Benny Hill - "Good evening everybody!"