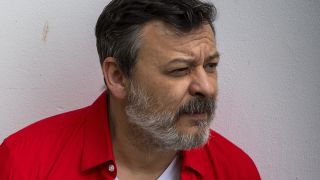 He's released a video for the pensive There’ll Come A War which is followed by the soaring instrumental Seeking The Room With The Three Windows.

The as-yet-untitled album, which is set for release later this year on a date still to be confirmed, was recorded and produced by Bradfield while the lyrics were penned by Welsh poet and playwright Patrick Jones – the elder brother of Manics bassist Nicky Wire.

The record will focus on the life, death and career of Chilean musician and political activist Victor Jara.

“The fear involved in that must be very low-slung and pernicious. I just wanted to reflect that. I wanted to show the seriousness of the story without being too heavy-handed about it.”

As for Seeking The Room With The Three Windows, Bradfield said it was inspired by a photograph of Jara standing at Machu Picchu with his acoustic guitar, adding: “The picture is a fantasy made real, it looks like organic prog! It screams, ‘I’ve got the freedom to do what I want’, and I found it as inspiring as anything.”