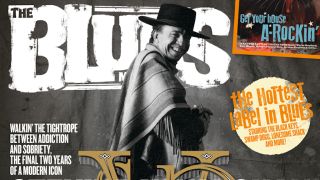 On what would have been his 60th birthday, the new issue of The Blues magazine celebrates the enduring legacy of Texan guitarist Stevie Ray Vaughan.

Behind the incendiary Strat licks, and nods to the influence of Jimi Hendrix and Albert King, was a man struggling to contain his own demons. From 12 steps to In Step, those closest to Stevie document the final two years of the man’s life, an incredibly fruitful period which saw him battle addiction to cut his greatest album, reconcile with brother Jimmie, and secure his position as the biggest influence on modern blues.

ORDER THIS ISSUE OF THE BLUES MAGAZINE ONLINE HERE.