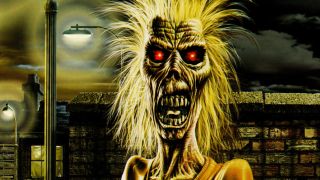 A group of Iron Maiden fans have launched an online petition to have Derek Riggs brought back on board as the band's artist.

Riggs, who’s credited with inventing the band’s Eddie mascot, created every album cover from 1980’s self-titled debut until 1990’s No Prayer For The Dying, before his contribution was reduced.

There’s been a flurry of online petition activity recently, with haters of Ghost launching a campaign to have the band split, and supporters lashing back with a counter-campaign.

Now Maiden fan Derek Tigner from the USA has joined the movement, and he’s secured nearly 400 signatures on his petition. He says: “Derek Riggs’ artwork and visual direction is second to none. Many fans view his artwork to be as influential as the music Maiden produces. Things haven’t been the same since he stopped being their exclusive artist – so we plead with the band to bring him back for any future artwork needs.”

Riggs, 56, who released an art book entitled Run For Cover in 2006, continues to work with his Eddie artwork via his Facebook page and website.