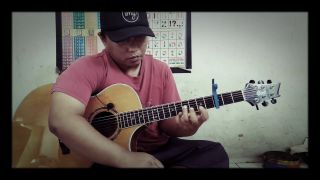 Indonesian YouTuber Alip_Ba_Ta has uploaded a cover version of Guns N' Roses' Sweet Child O' Mine, and it's generated over a million views in a just a week.

It's the latest in a long series of clips uploaded by the guitarist – who currently has 1.49 million subscribers to his YouTube channel – and joins previous 'fingerstyle' cover versions of songs including Linkin Park's Numb, Europe's The Final Countdown, System Of A Down's Toxicity and Bon Jovi's It's My Life.

Little is known about Alip_Ba_Ta, except for the fact that's he's a forklift driver from Jakarta, Indonesia, and that the success of his videos – his most popular clip, a version of Avenged Sevenfold's Dear God, has been viewed over eight million times – has prompted to a series of reaction videos from other YouTubers.

Below you can watch Alip_Ba_Ta cover of Sweet Child O' Mine, as well as a sample of the reaction clips, some of which have also generated hundreds of thousands of views.

The internet is weird.