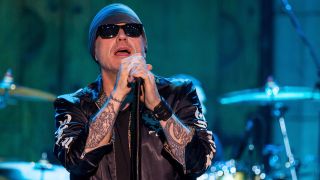 The Cult’s Ian Astbury says the band have stayed relevant over the years because they “have a lot left to say.”

But the vocalist says the group, formed in 1983, keep their finger on the pulse of the modern world – which is key to their ongoing success.

When asked whether the band had come “full circle,” Astbury tells Canoe: “Not so much, because we’re not really taking stock – we’re just getting on with it.

“We’re trying to make choices based upon instincts. We’ve been offered a lot of opportunities to make money touring with artists who maybe had commercial and artistic successes several decades ago. But we choose not to do that.

“We still believe that we have a lot left to say. We’re driven and responding to the world we live in today. We don’t want to be a pastiche of what we did 20 years ago.”

The Cult are currently touring Canada.