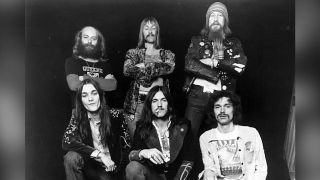 Hawkwind mainman Dave Brock has recalled the band’s decision to fire Lemmy in 1975 – and the jokes both parties made about it afterwards.

The Motorhead icon died at home in Los Angeles on December 28, two days after being told he had an aggressive form of cancer.

Brock yesterday paid tribute to his old friend, saying they’d always had a “magical bond” when they worked together. Lemmy went on to form Motorhead in 1975, and the bands toured together two years later.

Brock tells the BBC: “He was a great character, a great musician. He’ll never be forgotten because he made a lot of great records.”

Lemmy regularly said he’d been kicked out of the band for “doing the wrong drugs.” Brock responds: “Our little joke, we always had, was that if he hadn’t been fired from Hawkwind he wouldn’t have formed Motorhead and gone off to this fantastic career and lifestyle that he had.

“It was a band decision – two of us didn’t want to sack him and four of us did. And off he went, blazing a star.

“It’s a great style of playing he had. Very few bass players play like Lemmy. He was originally a guitarist, and when he joined us he didn’t have a bass, so we had to go to a second-hand shop and buy a bass for him.

“He was a very eccentric lad – but he did what he wanted to do.”

Former Hawkwind member Nik Turner has released his own statement, saying: “We had a good time together, long remembered. May you speedily fulfil the furtherance of your destiny, and be reincarnated into your next evolution.”

Queensryche say: “Our heartfelt condolences go out to Lemmy’s family, friends and fans. You will be missed.”