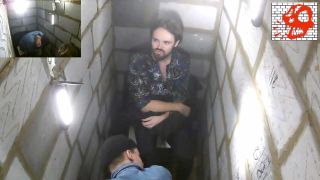 Nottingham rockers Haggard Cat have entombed themselves in concrete as a 24-hour protest to draw attention to the possible negative impact of Brexit on musicians' ability to tour in Europe.

“Locking yourself in a box is a stupid idea," explains frontman Matt Reynolds. "As is Brexit.

"It’s intentionally doing something we know is stupid and not in our best interests and puts us at risk," he continues. "As touring musicians, we can see that the outlook for playing in mainland Europe post-Brexit is bleak, and potentially not even viable for developing artists.

"We really wanted to demonstrate our feelings on the matter and put across how isolating Brexit is going to be for everyone in Britain, but from our perspective as musicians in particular, by isolating ourselves physically with bricks and mortar."

The pair – completed by drummer Tom Marsh – are streaming the protest live on the internet, allowing fans to chat and ask questions.

When Classic Rock checked in after a couple of hours, the pair were already showing signs of cabin fever, and were singing the lines to Don't Hug Me I'm Scared's disturbing children's classic Scrub Scrub Scrub 'til the Water's Brown.

In August, Fish reported that touring plans and production costs could be affected if the UK left the European Union without a deal at the end of this month.

"It affects me on so many levels including manufacturing the new album," said the singer. "It may mean shifting production to Europe including the clothing merch which up until now has been manufactured in the UK by a firm who themselves will suffer as so many bands who use them will be in the same position regarding export/import duties."