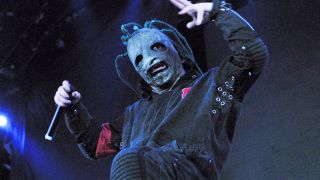 The follow-up to their self-titled 1999 debut was released in 2001 and was a major success across the globe, spawning the singles The Heretic Anthem, released as Heretic Song, Left Behind and My Plague.

He exclusively tells Metal Hammer: “The biggest memory for me was recording Iowa naked, cutting myself up with a broken candle.

“That was probably the one memory that comes out. It was the one time that producer Ross Robinson didn’t come in the vocal booth with me. He probably wouldn’t have had a good time in there with me naked!”

Speaking in 2011 about the recording session, former drummer Joey Jordison said Iowa was “probably the scariest track of all time.”

He added: “I remember Corey doing it because I was sitting right there in the room as he did it. I can run my mouth real quick, but in the middle of that zone? I’d get the fuck out of there and listen from another room.

“When someone’s in a zone like that, they don’t wanna be interrupted.”

The full article on Slipknot’s Iowa album features in issue 286 of Metal Hammer, which is out on July 19.

Slipknot are currently on tour with Marilyn Manson, while it was recently confirmed that Taylor would guest on Korn’s upcoming album.