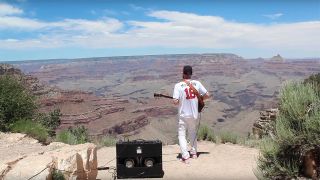 Guitarist and baseball fan Andrew Suggs is celebrating after his video showing him playing The Star-Spangled Banner at the Grand Canyon went viral.

Suggs released the video to mark Independence Day in the US last week, and it showed him playing the anthem to the vast canyon in Arizona while wearing an Atlanta Braves uniform.

Suggs said: “I took my Gibson Les Paul Goldtop and Vox AC30 to the Grand Canyon to pay homage to our nation by performing the national anthem. I plugged straight into the amp and turned it all the way up!

“I’m from Atlanta so I had to rep my city and my Braves while at the Canyon! I’m pretty sure this is American history, being the first person to record the national anthem on electric guitar at the Grand Canyon!”

He added: "It took a lot to pull this off – especially in one take! There was no crew involved so I was juggling three cameras plus audio tracking and running electricity off of a vehicle!"

Suggs later posted a picture on Instagram telling his followers that the Braves were so impressed with his performance, they’ve invited him to play the anthem ahead of first pitch at SunTrust Park at some point this season.

As he wore catcher Brian McCann’s no.16 jersey, maybe Andrew will get the chance to meet his hero later this year at the ballpark.

I’ll be playing at SunTrust Park this season! Be on the lookout for details! @braves @gibsoncustom @brian_mccann_16 @suntrustpark @asuggs16 Andrew Suggs (Drew)