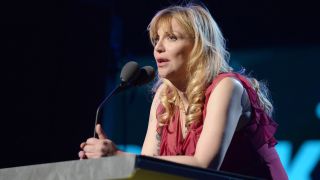 Courtney Love says there was a race between her and Dave Grohl to see who would be the first to bury the hatchet on their long-running feud.

The Hole singer reveals she wanted to make peace with the Nirvana drummer at their induction into the Rock And Roll Hall Of Fame last month – and she jokes about being angry that he got there first.

She tells Pitchfork “On my way to the bathroom, I saw Grohl, and Grohl saw me. He came up to me first, which really pissed me off because I was going to go up to him first. I wanted to beat him to the punch.

“I was like, ‘All right, no matter what happens, we’re not going to be bitches.’ That was my attitude going in, and obviously his. Not much else needs to be said. We just both knew it was time to let it go, and we were ready to do it.”

Love admits she’s relieved to have put the situation behind her, two decades after the death of her husband Kurt Cobain. She reflects: “We didn’t even talk at the funeral. None of us. And so, 20 years of me getting Yoko-bashed and Dave-bashing, and me-bashing and making it worse, all that shit; the legal stuff, the trial; we just buried it. It brings tears to my eyes to even talk about it.”

The apparent end of the feud came on stage at Nirvana’s induction ceremony in New York, when Love embraced both Grohl and bassist Krist Novoselic. She says: “There were certain lawyers who said it was the most moving moment of the night. There were some hecklers who booed me, which was weird and off and scary. I ignored it. I just looked at who was on stage and was like, ‘Ah, fuck it.‘”

Meanwhile, she’s revealed an anticipated on-again-off-again Hole reunion could still take place. She reports: I’m not going to commit to it happening, because we want an element of surprise. There’s a lot of i’s to be dotted and t’s to be crossed. It’s next year’s concern, but we’ve hung out, we’ve sat down, we’ve met, we’ve jammed.

“It would only mean anything if we did something relevant. If we can get two killer songs together and then look at an album… we definitely would be looking at an album. I can’t live on the oldies circuit.”

Earlier this week Seattle police released a note found in Cobain’s walletre at the scene of his death, which seemed to mock his wedding vows to Love.