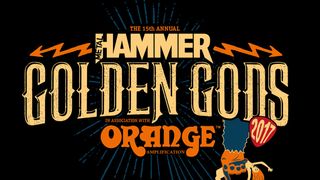 Artists from across the world of rock and metal have been honoured at the Metal Hammer Golden Gods in association with Orange Amplification in London.

The 15th annual event was hosted by Fozzy frontman and WWE megastar Chris Jericho and saw Orange Goblin, Avatar, Clutch and Mastodon play in front of a packed house at the city’s IndigO2 at The O2.

Prior to the event, Orange Goblin’s Ben Ward told Metal Hammer: “It’s a celebration of everything that’s happened in the past 12 months in heavy music and everyone that’s here shares that appreciation. It’s great to have something like this that recognises that.

Pallbearer bassist Joe Rowland told TeamRock Radio: “I feel incredibly delighted and kind of astounded because never in my life would I have imagined something like this happening.

“It’s so incredibly important to me and us as a band. Our fans were the reason this happened. To me, that’s the pinnacle.”

Accepting the award from Saxon vocalist Biff Byford, O’Keeffe said: “I failed music at school so I’m going to show this to my high school music teacher.”

He later told TeamRock Radio: “I’ve never won anything in my life. It’s a lot of fun playing in a rock’n’roll band and it’s good to get an award.

“I’m sort of known as someone who makes a living smashing a beer on their head, so it’s good to be recognised for the one pentatonic blues scale that I do know. I’m definitely not the best guitarist in the world to be winning an award like that, so I’m really humbled.”

Devin Townsend was named Riff Lord, while The Dillinger Escape Plan, who will go on indefinite hiatus following their current run of live shows, received the Icons award to mark their illustrious 20-career.

Prophets Of Rage collected the Spirit Of Hammer award, and guitarist Tom Morello was delighted to receive the iconic accolade.

Speaking with TeamRock Radio, he said: “It feels great because we love metal and we love hammers and the Spirit Of Hammer award is for breaking new ground and going against the grain. We’ve done that with our music and our politics our entire career, so we do feel proud to embody the Spirit Of Hammer.”

Guitar legend Tony Iommi was on hand to collect the Golden God award on behalf of Black Sabbath, who brought the curtain down on their 49-year career earlier this year.

He told TeamRock Radio: “For me, every time we get an award it reiterates that people are thinking about you and saying how much they appreciate what we’ve done.”

A full list of Golden Gods winners can be seen below.