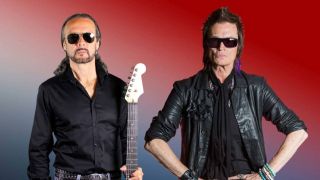 Voodoo Hill have released a lyric video for their song Waterfall.

It’s the title track from the group’s upcoming third album, due out on October 16 via Frontiers Music Srl. Voodoo Hill is a collaboration between Italian guitarist and producer Dario Mollo and former Deep Purple singer Glenn Hughes.

Mollo says: “Waterfall came about as a result of the most prolific and creative period I had in my entire career. I wrote and recorded more than 35 song ideas in a very limited amount of time, leveraging from all the experiences I gathered as a guitar player, writer and producer.

“I also wanted the songs to sound as fresh as possible, trying my best to preserve the feeling of the overall performances, so I used very old school recording methods, including recording acoustic drums in rooms with natural reverb.”

Mollo adds that he wanted Hughes to be more involved in the process on this record. He says: “I sent him the songs before the final mixes in order to have his advice on the final result. That was a precious process that brought substantial changes.

“For instance, on Last Door, I literally changed the entire guitar riff to make it work better with the vocal melodies. In the end, the song was basically rewritten and dramatically improved.

“It was a fabulous creative process, which I am truly confident will last more than a bunch of listening sessions and will offer a lot of enjoyment to all those will want to follow Voodoo Hill in this exciting musical venture”.

Hughes goes on a solo European tour later this month.