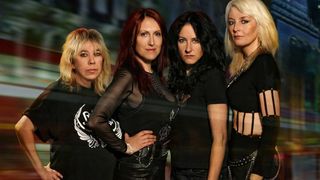 This year, the Silja Rock cruise will celebrate its 25th anniversary.

It’ll set sail between Stockholm and Helsinki on April 27-29, with organisers unveiling the first wave of artists who’ll appear at the festival.

A statement reads: “Our journey begins officially when the boat leaves the dock at 4.45pm from Stockholm, Sweden. The Captain of the ship allows us to board the ship a few hours early for a sneaky start – he’s a bit of a rock fan himself so we’ve heard – so we can get in the mood for the rock cruise of the year.

“BBQ grills are fired up and the beer starts to flow while we are warmed up on the sun deck with some live rock to set the tone for the trip to come from one of our bands.”

Along with the live music, there will also be DJs, restaurants, bars and relaxation areas.

Girlschool are one of the five cover artists in the latest issue of Classic Rock which is dedicated to the women who who have changed and continue to shape the rock landscape. Rock Goddess also feature on the cover CD.

The new Classic Rock is on sale now at all good newsagents, or directly from us.

Girlschool: "We weren’t trying to fit in with the guys, we were being ourselves"