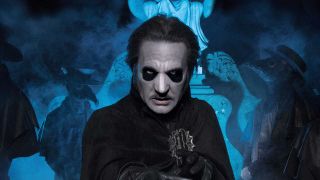 Ghost vocalist Tobias Forge has suggested that the next Ghost album will be "thematical" in nature.

Forge confirmed in February that work had already begun work on the follow-up to 2018’s Prequelle, telling Billboard that he had “tons of bits and pieces” written.

At Heavy Montreal Festival over the weekend, Forge was quizzed by Canadian site The Metal Voice about whether or not Ghost would ever commit to writing a full concept album. In his answer, he let slip about what fans might be able to expect from the upcoming album.

"The records that I've done so far have been thematical – loose, conceptual, with a little bit of a framing," said Forge. "As of right now, I know that the next record will be more thematical in the same vein as the previous ones."

But he went on to say a full concept album could be on the cards at some point. "I can definitely see the concept of doing more of a rock opera in the future. [But] if I'd ever make a rock opera the way that I think we're talking about here, it would probably not be necessarily a rock record. It would probably be more classical, more vocal and more traditionally the sort of stuff that you'd hear on a musical – not any musical, but more score-based.

"It would be probably something more like, 'Here's a completely different record written for this purpose.' Having said that, I don't feel necessarily that a rock record would be suitable for that. But I don't know. We're not there yet. Maybe in the future. We will see."

However, Ghost have previously confirmed that a new album won't be ready before 2021, so fans will have a while to wait before the new material is unveiled.

Ghost recently announced The Ultimate Tour Named Death, which will be taking place across America and Europe later in the year. Check out full dates below.