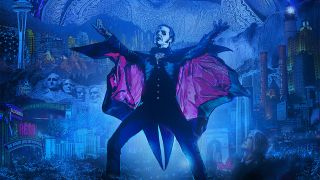 Ghost have announced that they’ll head out on the road across North America later this year.

The run of 24 shows is called The Ultimate Tour Named Death and they’ll be joined by special guests Nothing More.

The tour will kick off at the Rabobank Arena in Bakersfield on September 13 and conclude with a set at the Cool Insuring Arena on October 26.

It’s a busy year for Tobias Forge and his Nameless Ghouls, who will play shows across Europe throughout the summer and return to the US and Canada for sets at Chicago Open Air and Heavy Montreal prior to the newly announced performances.

Back in February, frontman Forge told  Billboard that he’d begun working on the band’s new studio album, which will be the follow-up to Prequelle.

The Ghost leader said: "I have tons of bits and pieces and stuff written, and I know that once I really start working that there's going to be a record which feels very inspired.”