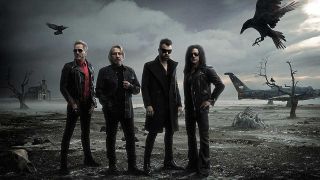 The single was produced by Greg Fidelman, who has previously worked with Metallica, Slipknot and Black Sabbath.

“I had to get used to the idea of starting from scratch again, which is good," says Butler. "It’s a challenge for me. But I really liked the music that I was hearing. It's not your typical metal stuff or hard rock stuff or whatever."

“I remember the first time that I started tracking against his bass, and I went, ‘Oh my God,’" says Stevens. “There's a lot of times in the studio as a guitar player, you get a guitar sound and you're trying to make it work, you're tweaking it. There was none of that bullshit. It just fit against his bass sound and it was really exciting for me. It was like, ‘Wow, I get to hear my guitar against a bass guitarist that I've loved since I was 15 years old.'"

"It's great because Matt really knows what he wants it to sound like and he just keeps going and going and going until he's got it right, until he's satisfied with his drumming,” says Butler. “It's really good to play with somebody who’s that professional. He's so knowledgeable about different drum styles and he's also a fan of Bill Ward, Sabbath's original drummer so he likes that kind of swing part of it as well.”

Stevens adds, "I wanted what I brought to this band to be unique and exclusive to this project and that took a little bit of soul searching and brain power. I wanted my guitar to really compliment the other members and their individual styles. I truly feel that in this band that the sum is greater than the parts."

“I'm just really excited for people to see this band live,” says Perez. “One of the things that I want to really emphasise is that this is an honest to God, down and dirty rock'n'roll band. We're energised, and we want to put on an incredible show."

The band have so far booked two shows for 2019: they'll play The UK's Download Festival on June 14 and at Hellfest in France on June 22.