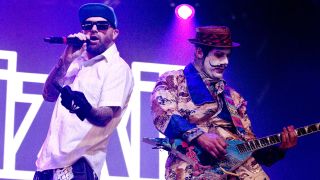 Limp Bizkit guitarist Wes Borland says the band’s long-awaited seventh album is delayed because frontman Fred Durst is “not happy with it.”

No release date has been announced for Stampede Of The Disco Elephants, which Durst previously hinted would be recorded along the same lines at Beastie Boys‘ 1989 effort Paul’s Boutique – abandoning traditional song structures.

And Borland admits there is still no sign of a confirmed release date for the record. On the subject of following a similar path to Paul’s Boutique, Borland tells Someone Who Isn’t Me (via The PRP): “That was the idea then. I’m not sure what his idea is now, exactly. I know we’ve had a lot of different sessions for this record.”

He continues: “And people, our diehard fans, really want it to come out. But the truth is that Fred‘s just not happy with what he’s working on – he’s not happy with it. So I know he’s been working on vocals for it on and off.”

On the material already recorded for the album, Borland adds that he’s not sure if it will feature at all.

“Some of that might be part of the record, that might still be what the record is,” he says. “I don’t know if more is going to be written or not.

“But in the same way, I’m much more the person where I’ve just been like ‘Let’s do whatever and just put it out.’ I’m all about capturing whatever is happening with me now.

“That’s probably why I’ve looked back and not liked a lot stuff that I’ve done. It’s because I’m looking back, like an old haircut that I had or something.

“I’m much more of a ‘Let’s do it and get it out,’ where he’ll just keep working on something until he’s happy with it, even if it takes years.

“And at this point it has taken years for him to get happy with it. I think his mindset is like, ‘Nobody gives a fuck so I better like it if I’m going to put it out for me.’ So I think that we don’t see eye to eye in that way. But I definitely understand how he feels about it.”

Limp Bizkit tour the UK with Korn later this year.

The Confessions of Wes Borland