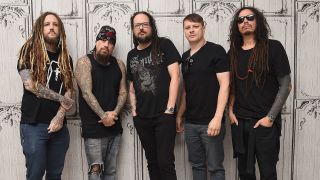 Speaking about the song, Jonathan Davis says that lyrically it’s about finding “your happy spot” when “shit gets crazy”, offering a sense of release and escapism.

But how did the collaboration happen?

“When I was working on this song, Corey texted Nick [Raskulinecz, producer] and it popped in my head that he would be the perfect person to collaborate on the record,” reveals Jonathan. “I’ve collaborated with everybody I’ve cared to collaborate with so far in my career, so it was hard trying to think of someone, but it so happened that Corey texted at the right time.

“I’ve been friends with him for a long long time, he’s covered my ass a couple of times, when I got really sick back in 2006 with that crazy blood disorder he came out and did a couple of songs with the band so we could at least show up and say that we tried to play.

“We’ve had a long relationship over the years, he’s a good guy and a great singer.”

Korn’s new album The Serenity Of Suffering is out October 21, but is available to pre-order RIGHT NOW!

You can get it from iTunes, Google Play, or a proper physical copy from Amazon!

Trust us, this album rules.