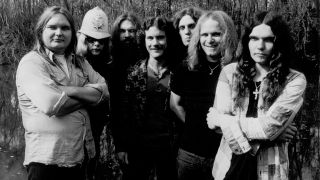 Former Lynyrd Skynyrd guitarist Ed King has died at the age of 68.

The news was confirmed on his Facebook page, with the message: “It is with great sorrow we announce the passing of Ed King who died at his home in Nashville, Tennessee, on August 22, 2018.

“We thank his many friends and fans for their love and support of Ed during his life and career.”

Lynyrd Skynyrd’s Gary Rossington was one of the first to react to the news, saying in a statement: “I’ve just found out about Ed’s passing and I’m shocked and saddened. Ed was our brother, and a great songwriter and guitar player.

“I know he will be reunited with the rest of the boys in rock and roll heaven. Our thoughts and prayers are with Sharon and his family.”

King was born in September 1949 and went on to found psychedelic outfit Strawberry Alarm Clock in the 60s. He then joined Skynyrd in 1972, taking over temporary bass duties from Leon Wilkeson and subsequently moved to guitar upon Wilkeson’s return to the lineup.

King played on Lynyrd Skynyrd’s self-titled debut album in 1973 and 1974’s Second Helping, which featured the classic track Sweet Home Alabama. King co-wrote the track with Rossington and Ronnie Van Zant and can be heard counting the “one, two, three” at the start of the song.

He left the band following the release of 1975’s Nuthin’ Fancy, but rejoined the lineup in 1987 for their reunion tour, which followed the devastating plane crash in 1977 which resulted in the deaths of Van Zant, Steve Gaines, Cassie Gaines, the band’s assistant road manager, the pilot and co-pilot.

King left Skynyrd for good in 1996 due to health issues and was inducted into the Rock And Roll Hall Of Fame with the band in 2006.

No cause of death has been revealed, but King had reportedly been battling lung cancer.