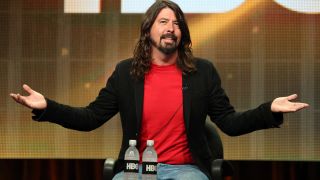 Dave Grohl admits he often didn’t know what he was talking about during interviews for his Sonic Highways documentary series.

The Foo Fighters recorded all eight tracks on their latest album in a different US city, and he shot an accompanying film for each. But he believes his lack of knowledge was a help instead of a hindrance.

Grohl tells Rolling Stone: “I’m a music nerd but I’m not a musicologist – I love talking about music and hearing stories, but I also love not knowing everything. The interviews turned into conversations that turned into lessons.

“The intention was to inform people, not just tell them something they already knew. I’m sitting in front of Allen Toussaint, Cyril Neville or Dr John and they’re telling me things I never knew; I think I have to do that to keep the tone genuine.”

He adds: “I don’t pretend to know everything – I’ll tell the subjects, ‘Just so you know, I don’t know what the fuck I’m talking about.’”

Grohl was particularly impressed by the time he spent in New Orleans, and describes the city as “like the sweetest piece of cake you’ve ever had.” He continues: “For any musician, if you need your batteries recharged, spend one week in New Orleans and it’ll renew your faith. Not only in music, but in the human race.

“As you walk down the street you’re next to a gangster, a lawyer, a cop and a college student – people from all walks of life together, dancing and celebrating music. That doesn’t happen everywhere. I wish it did; the world would be a much happier place.”

Sonic Highways was released earlier this month, and Grohl has ruled out making another album the same way. The Foos return to the UK next year for five dates.

May 25: Sunderland Stadium Of Light