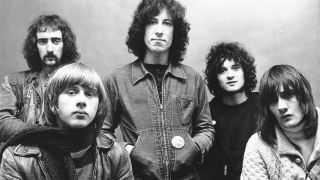 In a tribute headed "Danny Kirwan May 13, 1950 – June 8, 2018", Fleetwood wrote, "Today was greeted by the sad news of the passing of Danny Kirwan in London, England.  Danny was a huge force in our early years. His love for the Blues led him to being asked to join Fleetwood Mac in 1968, where he made his musical home for many years.

"Danny’s true legacy, in my mind, will forever live on in the music he wrote and played so beautifully as a part of the foundation of Fleetwood Mac, that has now endured for over fifty years.

"Thank you, Danny Kirwan. You will forever be missed!

The cause of death is unknown at this time.

Kirwan's first recorded work with the band was Albatross, Fleetwood Mac's only UK number 1. Peter Green had been struggling to finish the song. With the arrival of Kirwan, everything fell into place.

Green commented later, "I would never have done Albatross if it wasn't for Danny. I would never have had a number one hit record." Kirwan's composition Jigsaw Puzzle Blues was the B-side – despite being the new boy, he played all the guitar parts himself.

On his first album with the band, 1969's Then Play On, Kirwan wrote half of the 14 tracks and contributed to the band's ground-breaking run of singles: Man Of The World, Oh Well, Rattlesnake Shake and The Green Manalishi (With The Two Prong Crown).

Where Jeremy Spencer had been rooted in early rock'n'roll and the slide guitar blues of Elmore James, Kirwan's style was more left-field, influenced by jazz and country music and bringing something new and psychedelic to the blues template. "Danny was a confused young man," Mick Fleetwood said in the sleevenotes to the reissue of Then Play On: he was playing "his blues".

Producer Mike Vernon commented: "Danny had a guitar style that wasn't like anyone else I'd heard in England. It reminded me of Lowell Fulson. There was a certain vibrato to the finger work that was quite unusual. And he had a really nice melodious voice."

But the band's sudden success created a band in turmoil. Peter Green was taking LSD, Kirwan was drinking heavily. Kirwan's precociousness and the success of his working relationship with Green meant that fellow guitarist Jeremy Spencer became increasingly sidelined.

Green left the band in May 1970. Spencer left in 1971, joining religious group Children of God.

Kirwan stayed on for 1970's Kiln House, Future Games (1971) and Bare Trees (1972). Outside of Fleetwood Mac, he played on Otis Span's 1969 album The Biggest Thing Since Colossus, on Christine McVie's first solo album and with the blues band Tramp.

Fired from Fleetwood Mac in 1972 due to his alcoholism and erratic behaviour, Kirwan released a trio of solo albums in the 70s. By the end of the decade his mental health deteriorated and he was reported to be living homeless in London in the 80s and 90s. He was inducted into the Rock And Roll Hall of Fame in 1998 but did not attend the ceremony.

In 2013, Mick Fleetwood looked back on the period and was asked what would have happened if Fleetwood Mac had been able to continue with the line-up of Kirwan, Green and Spencer. ""I really feel that we would have had a similar story, in a different way, as Led Zeppelin," he said. "That's where we were headed."