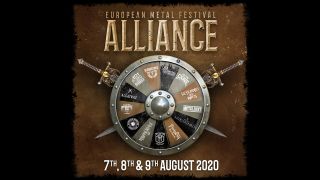 Last month it was revealed that 13 festivals would be collaborating on a new fundraiser titled the European Metal Festival Alliance to benefit the "beleaguered" independent festival sector.

Now the final lineup has been revealed, with organisers saying: “Across the weekend, you’ll be able to watch never broadcast before sets of Sabaton’s 2019 headline show from Bloodstock 2019, Avatar’s 2019 headline Alcatraz Festival show, as well as shows from Tesseract (Bloodstock 2019), Thy Art Is Murder, Napalm Death, Grand Magus and Battle Beats – all from Summer Breeze 2019.

Organisers add: “If you’re unable to watch a band at their ‘stage time’, don’t worry, as you’ll be able to replay all sets for up to 48 hours afterwards.”