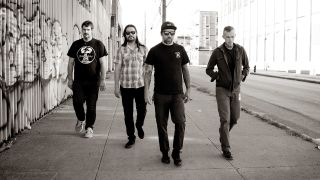 In conversation with Converge frontman Jacob Bannon, one word comes up again and again: abrasive.

The Boston hardcore pioneers have long been known for their coarse, grinding sound, and on ninth album The Dusk In Us, the destruction and despair glints through like broken glass. Today, we call Kurt and Jacob at home, a few days after their show supporting Gojira at Brooklyn Steel in New York. At this point in their career, Converge headline most dates they play, so opening for a more ‘accessible’ band can present some challenges.

“When you play within that kind of environment, you’re playing to people who aren’t familiar with the animal that you are – we’re the zebra and they’re the horses,” laughs Jacob. “It’s cool to show people there are different kinds of aggressive music. The first time I saw Slayer, they were opening for Judas Priest when I was a kid, and that was a completely different animal to anything I was expecting. It’s cool for us as artists to be that challenging thing, and for other artists to be the gateway.”

That’s another word that comes up a lot: artist. Jacob suggests that personal art is the only kind worth doing – presenting your truth to the world without barriers. It’s a tradition he’s followed since Converge’s 1994 debut, Halo In A Haystack.

“If you don’t have that honesty and you’re not true to yourself, then you’re just playing dress-up,” he says. “It’s a really powerful thing to get something psychologically out of creating art and music. We write personal songs about the subtle nuances and complexities of our lives – things that we go through every day. You’re going out there trying to expel a lot of that darkness from your life in music, and if you’re not honest in that process then you get nothing from it.”

A lot has happened to Jacob and his bandmates over the past five years, in what he simply describes as “a whole lot of highs and a whole lot of lows”, but it’s all been poured into The Dusk In Us. Each member became a parent during this period, and opening track A Single Tear is about Jacob’s relationship with his son. He makes himself vulnerable, screaming the line, ‘When I held you for the first time, I knew I had to survive.’

The rest of the record is more difficult to decode. Songs such as Wildlife and Cannibals deal with an ongoing primal instinct to survive, while he speaks about a ‘sick matriarch’ on I Can Tell You About Pain and a ‘frightened little boy’ on the title track, alluding to some darker family issues. But there are barely any clues as to what’s actually happened, and Jacob hints that the songs are a form of ongoing therapy.

“It’s tough to explain, because then I’m just sitting and reliving some tough stuff and some sad stuff that I’d rather not put out there in that kind of specific way,” he says. “It’s not about that – it’s about healing more than anything else. There are songs about how I fit into the current society and how I don’t feel attached to certain things. I explore the idea of compassion and empathy, which is something that’s incredibly important to me, and can be lacking in a variety of places in our lives, which creates other issues.

“I write about my personal life, my family life. I write about interactions with friends – people around me that I care about immensely – and I’ve done that with everything that we’ve done. We had so much going on in our lives, so many highs, so many lows, and that’s the energy that we put into this.”

Jacob’s softly spoken and modest, refusing to compare himself to other people or even acknowledge the strength of his own success. He also avoids explaining his songs, claiming that it kills their magic and makes him uncomfortable. But he’s not afraid to talk about his emotions, and draws a divide between people who write for their listeners, and people who write for themselves.

“Making music is a super selfish thing; you have to be introverted,” he claims. “If you start thinking about the audience and how they’re going to perceive something, then you start writing with the audience in mind, and that’s not something that interests me. That’s something sitcom writers do.”

These days, after years of experience, he admits he’s able to get his mind back into a song’s “emotional place” much faster than he did when he was younger. But being in Converge can be physically demanding, too. Following shows for previous album All We Love We Leave Behind, Jacob needed surgery to repair damage to his knees sustained over years of touring, leaving him off his feet for a few months in 2013. He’s also literally bled for his art.

“Playing any sort of instrument is taxing, especially as an abrasive vocalist where you are literally tearing your vocal cords up,” he confesses. “It’s not a pretty sight when you scream so loud you cough up blood. That happens often. And that’s not for dramatic effect, because it hurts – it sucks.”

Converge have faced difficulties as a band, too. Over the last few years, its members have been flexing their creative muscles elsewhere, making it difficult for them to reconvene. Jacob released two solo records under his Wear Your Wounds moniker, as well as continuing to run his label, Deathwish; drummer Ben Koller worked on Mutoid Man and All Pigs Must Die albums; bassist Nate Newton has released albums with Old Man Gloom and Cavalera Conspiracy; and guitarist Kurt Ballou has been producing some of heavy music’s most savage bands, including Nails, Code Orange and Full Of Hell.

So when it came to start work on The Dusk In Us at Kurt’s GodCity Studio earlier this year, they struggled to find time to get in a room together. Converge demoed a “ton of material” while Jacob was touring his Wear Your Wounds project around Europe in spring. He worked on skeletons of the songs, but the band didn’t have a chance to thrash out the full versions until they recorded in May. Jacob doesn’t sing the songs with the band until he’s recording them, meaning no one knew what they would really sound like.

“We were hearing songs take full form inside the studio,” says Kurt, who produced this Converge record and the previous six. “I wish it wasn’t the case, and I wish we could write all the songs, go out and play them for a little while and then record them. I feel like the songs we’re playing live are better now than they are on the album.”

There were also arguments in the studio about the tracklisting.

Despite the tension, Jacob says Converge is a democracy, and the The Dusk In Us is the result of four artists working together for a common goal. Even their lawyer, booking agent and label are members of the band or people from the same hardcore background (“It’s important to us to live within a closed economy – not just for the finances of it all but in terms of trust,” says Kurt). Jacob and Kurt themselves have been in Converge for more than 25 years, and are the only original members. Now in their 40s, their bond is stronger than ever.

“Jake’s a great friend; he’s very thoughtful and insightful,” says Kurt. “We’ve been through a lot together. As a creative partner, I’m very thankful that he and I found each other. I don’t think either of us would be where we’re at today without each other.”

Jacob admits that he has “an addiction to forward movement” when it comes to creative endeavours, which drives him on. Last year, the band’s Blood Moon shows even deconstructed the idea of what Converge is. Reimagining their back catalogue as a darker beast, alongside members of Chelsea Wolfe and Cave In, the band delivered a life-affirming experience that proves there are endless artistic experiences to be had. They hope to revisit the project – when they have time, of course.

“We’re all members of Converge, but we’re all so much more, and that’s what makes our band totally interesting,” says Jacob. “I’m not just a guy in a band waiting to go on tour – life has a lot more to offer. You only get one chance at this shit. You’ve got to do the most you can with what you’ve got. If you don’t, then you’re going to have regrets – and that’s something I don’t want to go through.”

The Dusk In Us is out now via Epitaph and Deathwish

Converge - The Dusk in Us album review