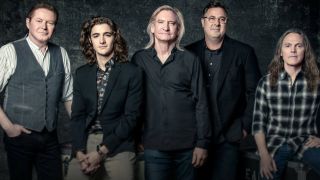 Eagles have announced a UK and European tour for 2019.

The band are currently on the road across the US, but will head across the Atlantic for further shows throughout May and June next year.

The run will get under way in Antwerp on May 26 and then visit Cologne, Munich, Amsterdam, Zurich, Stockholm and Copenhagen before hitting the UK for six shows in London, Manchester, Birmingham, Liverpool, Leeds and Glasgow. The tour will conclude with a performance in Dublin on July 6.

Sheryl Crow will support on the London date.

Don Henley, Joe Walsh, Timothy B Schmit and Vince Gill will be joined by Deacon Frey – the son of late Eagles guitarist and vocalist Glenn Frey, who died in January 2016.

Tickets will go on general sale at 9am on October 5. Find a full list of dates below.

Earlier this week, the band announced the career-spanning Legacy box set, which will be released on November 2 via Rhino Records.