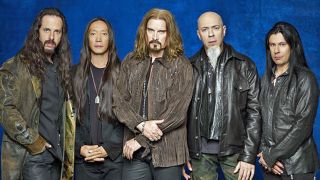 And the guitarist says the new generation of progressive rock bands is heartwarming for Dream Theater, who are relative veterans of the genre.

Ahead of the band’s headline slot on the Saturn Stage at Sonisphere tonight, Petrucci tells TeamRock Radio: “Yeah, less cool is correct. Our second album came out and Nirvana and all that was all over the radio. For some strange reason for that time, 1992⁄93, Pull Me Under from that album somehow broke through and was a radio hit. It didn’t make any sense in the midst of what was going on with grunge – but it was poking through and it was interesting.

“Over time, those differences and the uncool factor and everything else actually became our strengths; what separated us out and make us successful in the long term.”

On the state of modern prog, Petrucci says: “I think it’s great for the progressive community.

“It’s been a style of music playing since the beginning we naturally latched onto, just because of the influences we had when we were younger. It’s always been this thing on the outskirts – now it’s great to see younger bands, and a splintering of the style and the genre. It’s great to see it exploding.”