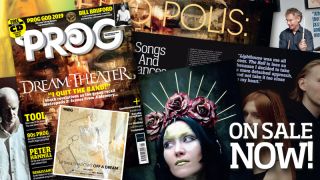 The new issue of Prog is on sale today. Dream Theater's seminal prog metal classic Metropolis Part 2: Scenes From A Memory celebrates it's 20th anniversary this year and the band are performing the entire thing on tour. So we talk to Mike Portnoy, John Petrucci and Jordan Rudess about the making of the album, with some surprising revelations.

IZZ - the Us prog rockers discuss the meaning of life, the universe and everything in between

Baroness - they release albums based on colourful concepts. But are they prog?

And music from IQ, Thank You Scientist, Warmrain, Edison's Children and more on the free CD.