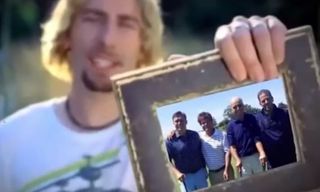 US President Donald Trump has run foul of copyright law after sharing a video meme featuring the music of Nickelback.

Trump posted the video at 10.06pm UK time yesterday, under the proclamation, "LOOK AT THIS PHOTOGRAPH!" The tweet took aim at the Democratic presidential candidate Joe Biden, and featured a clip of the former US Vice-President claiming that he'd never discussed any business dealings with his son Hunter.

The tweet was the latest in a long series of anti-Biden posts by Trump that come in the wake of the impeachment inquiry launched by Democrats in the House of Congress last week.

The Biden clip was followed by a segment of Nickelback's video for their 2005 hit Photograph, which features frontman Chad Kroeger singing, "Look at this photograph / Every time I do it makes me laugh / How did our eyes get so red? / And what the hell is on Joey’s head?"

It appears that this section is what got the President into hot water, with the embedded video now replaced by a message reading, "This media has been disabled in response to a report by the copyright owner."

One of the most popular responses to the original tweet comes from Testament guitarist Alex Skolnick, who tweeted the message, "Fixed it for you: 'PHOTOGRAPH!' (apologies to @DefLeppard)" above a series of photos featuring Trump alongside sex offender Jeffrey Epstein, who was found dead in his New York jail cell in July.

At the time of writing, Skolnick's clip remains online.

Fixed it for you: “PHOTOGRAPH!” (apologies to @DefLeppard) pic.twitter.com/7IkmiYtokMOctober 3, 2019