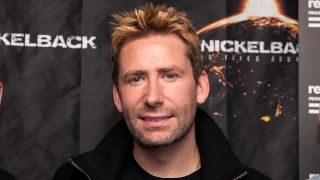 The band is one of the most successful of recent times, with 50 million albums sold worldwide. But while they have a lot of fans, they also have a lot of haters.

In 2012, The Black Keys’ drummer Patrick Carney stated: “Rock’n’roll is dying because people became OK with Nickelback being the biggest band in the world.” And for Kroeger, the band’s lead singer, guitarist and songwriter, there has been abuse of a more personal nature – most notably when British music journalist Ian Winwood described him as simply “a cunt”.

But in the interests of fair play, TeamRock hereby presents the case for the defence of Chad Kroeger. The man celebrates his fortieth birthday today, so let’s show the guy some respect – maybe even a little love. After all, as Rolling Stone magazine recently said: “It’s hard not to feel a little bad for Nickelback. Sure, they aren’t the greatest band in the world, but people act like they make Nazi folk music or something.”

Chad Kroeger is not a pompous asshole. If he was, his band would not have a name that is a self-deprecating joke. That name originates from the days when Kroeger’s brother Mike, the band’s bassist, worked in Starbucks, and lost count of the times he handed five cents in change to a customer and said: “There’s a nickel back.”

The band’s previous name was also a joke. For a brief time, they were called Village Idiot.

A lot of rock stars make a big deal out of how hard their lives have been. But Chad Kroeger had it tougher than most. At the age of 14 he was sent to a correctional facility for young offenders. “It was jail for kids,” he said. “Except I was fourteen and I was in with a bunch of seventeen year olds. I don’t know if I was an angry kid. I just had this little demon inside me saying, ‘Pick up that rock and throw it through that window’. I was a little bastard.”

Kroeger’s first love is heavy metal. As a teenager, the band that he worshipped above all others was Metallica. He admitted: “I wanted to be Kirk Hammett so bad it hurt.”

Kroeger is nobody’s fool. At an early age, he realised how the world works. He explained: “When I watched Fight Club, and Brad Pitt went into that spiel about everybody trying to sell you shit that you don’t need, I had that revelation ten years before when I was stoned on mushrooms.”

Kroeger’s band paid their dues before making it big. Nickelback’s first two albums, Curb and The State, sold next to nothing and the band played in every two-bit rock club in Canada before their third album Silver Side Up became a monster hit.

How You Remind Me is a genuine modern rock classic. And the words in that song connected with millions of people – except the one that Chad was writing about. “I was really pissed off at my girlfriend when I wrote it,” he said. “I needed to write the ‘I hate you’ song and really let her know how I felt. But when I played it to her she said, ‘I really like that song.’ I was like, Aarrggh!”

With that song, Nickelback scored a victory for hard rock music. The parent album Silver Side Up was the biggest selling album of 2002 in the UK – beating Oasis, 50 Cent and Christina Aguilera among others. It was also the top selling rock album in America at a time when the US chart was dominated by pop, hi-hop and r&b stars such Eminem, Britney Spears, Nelly, Shakria and Pink.

How You Remind Me is not the only great song that Chad Kroeger has written. Photograph and Someday are brilliant radio-rock anthems, and at the heavier end of the scale, Never Again has the crunch of Load-era Metallica.

One of the greatest rock producers of all time is a Nickelback fan. The band’s 2008 album Dark Horse was produced by Mutt Lange – not because Lange needed the money, but because he loved the band. And this is the man who produced Back In Black and Hysteria.

Kroeger is well aware of the absurdities of fame. Earlier this year, when celebrity magazines claimed that his marriage to fellow Canadian star Avril Lavigne was in trouble, he said: “When you’re standing in the checkout line at the grocery store and you look over and it’s your face on there. Not the… Kardashians… and Brangelinas… it’s ‘Chavril.’ You’re like, ‘Can I buy all these? So that no one can see?’”

And even when he was branded “a cunt” in the UK press, Kroeger could see the funny side of it. Inspired by the Guns N’ Roses song Get In The Ring – in which Axl Rose proposed to settle his beefs with various journalists via good old-fashioned fistfights – Kroeger suggested a boxing match with Ian Winwood that would raise money for charity. Winwood sensibly declined – predicting that he would be comfortably beaten. But as Kroeger said: “I wouldn’t have hit him too hard.”