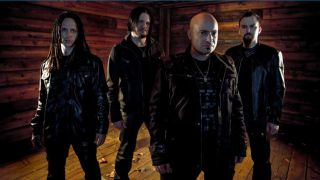 Disturbed have checked in to report that they’ve completed recording what will be their seventh studio album.

No released date for the follow-up to 2015’s Immortalized has been given, but bassist John Moyer uploaded a post to his Instagram account showing him, drummer Mike Wengren, guitarist Dan Donegan and producer Kevin Churko.

The news comes after the band released a short video from The Hideout Recording Studio in Las Vegas, Nevada, showing them working on the new record.

In the clip, frontman Draiman says: “Every time we put out a piece of art, it continues to define who we are. What could possibly be more important than that and require more of your focus and your time and your energy?

“This is war. You fight for the strength of your creation, you fight to make the greatest thing you possibly can – and it’s worth every bit of sweat, it’s worth every tear, so that’s what we live for.”

Disturbed have a handful of live North American dates planned this summer. They play The Colosseum in Windsor on July 11, Mount Pleasant’s Soaring Eagle Casino on July 12 and Cadott’s Rock Fest on July 14.