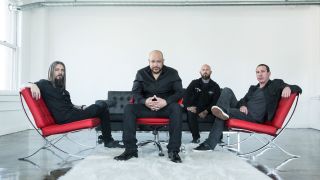 Devil You Know are gearing up to unleash new album They Bleed Red onto the metal masses this November, and we’re premiering the first taster of the new single Stay Of Execution.

“Stay Of Execution was the last song that was written for our new album,” says drummer John Sankey. ”I wanted us to have a track that was fast, brutal and really slamming with an unconventional song structure. Francesco and I had some demos that we hadn’t used yet, so I tore a few of those unfinished tracks apart and pieced together the coolest sections to create this song.”

“The point was to make a ‘heavy’ song,” guitarist Francesco Artusato continues, “We have the black metal part, the groovy part, an epic chorus, cool bridge section, gang vocals at the end, etc. It’s literally a bit of everything. I wrote the main riff while walking in a mall somewhere while on tour. I was humming it into my phone so I would remember it for later. It was a weird day, ha ha.”

Listen to the result of the weird day below.

They Bleed Red is out 6 November via Nuclear Blast. They’re supporting Five Finger Death Punch at their show on 28 November at Wembley Arena. Tickets here.