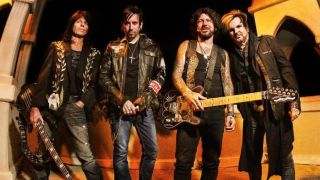 Devil City Angels’ self-titled debut album was produced by the band in Los Angeles and mixed in Nashville by Anthony Focx. It’s scheduled for release on September 18. The band launched a PledgeMusic campaign for the album last year.

In a statement, Century Media say: “Following the recording of the album, bass player Eric Brittingham decided not to continue with the project and his spot has been taken by Rudy Sarzo. The band just completed a video for their first single Boneyard. The video was shot in Los Angeles and directed by Marco De Molina and will debut in early July.”

Last year, the band made their track No Angels available to stream.