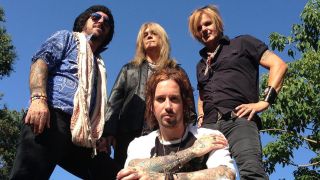 Devil City Angels have released a stream of No Angels – the fourth release from the US band.

They came together earlier this year, with Guns revealing the band want to focus on a no-nonsense rock sound.

He says: It’s basic and it’s simple. We might groove out a little more on some things and we might have a ballad or two, but other than that, we’re going to keep it pretty straightforward 1977 rock.”

The band hit the road in September across the US.

Guns’ side project The Tracii Guns League Of Gentlemen released The Second Record earlier this month – an album featuring covers by artists including The Rolling Stones and Neil Young.