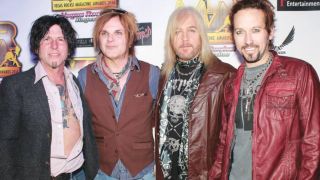 Supergroup Devil City Angels have made their upcoming debut album available to pre-order.

They say: “After years of hits with our other bands, we’ve joined forces to create exciting new rock music for you. We are recording our debut album with the band this winter and we’re set up in a big old house in LA.”

Exclusives available include a signed copy of the album, T-shirt and poster bundles, an autographed drum head and sticks, a personal video message from the band and a private martial arts lesson from Rockett, who is a black belt in Brazilian Jiu Jitsu.

Earlier this year, the band released a stream of track No Angels and Guns revealed they were focusing on a classic rock vibe for the rest of the album.

He said: “It’s basic and it’s simple. We might groove out a little more on some things and we might have a ballad or two but other than that, we’re going to keep it pretty straightforward 1977 rock.”

A total of 5% of cash raised from the album pre-sale will go towards Little Kids Rock – a charity which trains teachers to instruct youngsters how to play music.